Peter Swift and the Little Circus 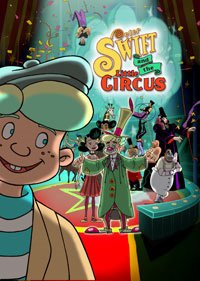 A fun cartoon series featuring many new voiceover talent. Dave did not have a principle role in this series, but fans would recognize his voice as any number of incidentals, bad guys, bullfrogs or … just about anything. Dave’s range allows him to play the lovable characters as well as those villains that may strike fear into your heart. Peter Swift…. not necessarily the “Strike Fear” type, but he still manages to make the baddies rough and tough.

Peter Swift, a young, fearless and passionate orphan is taken in by a wandering troupe: The Little Circus. Swift integrates into the troupe with the strong intention of making the most of his new life as a circus performer. Through the members of the Little Circus, every child will find an echo to his or her most intimate concerns such as intolerance, loneliness, love and hate while spending the time with Swift and his captivating adventures.